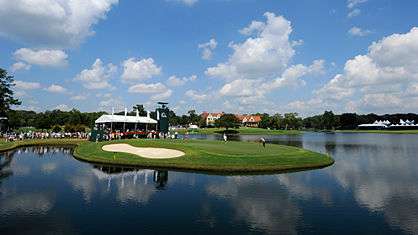 The Tour Championship is the final event of both the PGA Tour season and the FedEx Cup Playoffs. Since 2004, East Lake Golf Club in Atlanta has been the event’s permanent home.

The tournament is contested by the Top 30 golfers in FedEx Cup points following the BMW Championship. This year the Tour Championship will be played from Friday 4th September to Monday 7th September 2020.

By merely advancing to the elite field in Atlanta, the 30 qualifiers already know that they are exempt into three of the four majors, some invitationals and the WGC Mexico Championship.

Also, in a one-off-move, the PGA Tour is opening up the field at the 2021 Sentry Tournament of Champions to those who qualify for the Tour Championship. With the reduced number of tournaments due to Covid-19, it means fewer tournaments and therefore fewer winners. The Sentry Tournament of Champions was traditionally reserved for winners of all PGA Tour events. The change to the qualification criteria will ensure a strong field at Kapalua Resort.

The player with the lowest aggregate score over 72 holes when combined with his FedEx Cup Starting Strokes will win the Tour Championship and also be crowned FedEx Cup Champion.

The host course is the 7,300+ yards Par 70 East Lake Golf Club. The course was originally designed by Donald Ross and later restored by Rees Jones in 1994. East Lake Golf Club is the home course of legendary golfer Bobby Jones and is the oldest golf course in the city of Atlanta.

The layout is a fair test of golf and with an elite field of just 30 players it is hard to find a formula that points towards a winner. There is no one statistic that jumps off the page and therefore the obvious applies – a player needs to be hitting fairways, greens and sinking lots of putts.

East Lake’s key challenge is on the greens and in particular grinding out pars. Those who putt well on the undulating Bermuda greens will prosper. Current Form is important and fatigue may be a factor for some players.

Last year, Rory McIlroy won the Tour Championship and FedEx Cup title for the second time having won both previously in 2016. He closed with a final round 66 to finish on a total -18 (267), four strokes clear of Xander Schauffele in second.

It was the Northern Irishman’s third win of the season following victories in the PLAYERS Championship and Canadian Open. McIlroy started the tournament 5 shots back of Justin Thomas based on the FedEx Cup Starting Strokes. The Top 10 players Starting Strokes for last year’s Tour Championship was as follows;

For more on how McIlroy captured his second Tour Championship and FedEx Cup, check out his strokes gained breakdown for the tournament

In 2018 Tiger Woods won the Tour Championship and in doing so securing a remarkable 80 PGA Tour wins. It was his first victory since the 2013 Bridgestone Invitational. Tiger closed with a final round +1 (71) to win by two strokes from Billy Horschel.

Justin Rose birdied the final hole to finish tied for fourth at -6 (274) and win the FedEx Cup. Had Rose missed the putt and finished a further shot back of Woods, Tiger would have won both the Tour Championship and FedEx Cup.

In 2017, a 23 year old Xander Schauffele carded a score of -12 (268) for the week to land the title and add to the Greenbrier Classic which he won in July that year. He shot a final round -2 (68) to finish one stroke ahead of Justin Thomas. Schauffele became the first PGA Tour rookie to win the Tour Championship since it began in 1987.

In 2016, Rory McIlroy was three shots behind with three holes to play when he holed a wedge from 137 yards on the Par 4 16th for an eagle. He closed with a -6 (64) to join a three-way playoff with Ryan Moore and Kevin Chappell, winning the competition at the fourth playoff hole.

McIlroy finished the week 3rd in Driving Distance T11 for Driving Accuracy, 2nd for Greens in Regulation and 3rd in Putts per GIR. He topped the field in Birdies shooting 20 in total.

In 2015, Jordan Spieth won on the strength of his putting. He gained 2.6 strokes per round on the field with 66 percent of the gain (1.7 strokes per round) attributed to putting. Spieth headed the field for both Strokes Gained Putting and Scrambling.

Webb Simpson 10/1 (E/W) – has qualified for the Tour Championship in the last three years with his results reading T13-T4-T16. Having a stellar season with 8 Top 10’s from 13 starts including 2 victories in the RBC Heritage and WM Phoenix Open. Features 2nd in this week’s Stats Analysis which is noteworthy considering the elite field that has qualified for the season ending event. He is also 12th on Tour for Strokes Gained Putting, 6th for GIR and 1st for Scoring Average. Sat out last week’s BMW Championship so should be arriving to Atlanta rested and sharp. This week as you would expect is all about DJ (hard to argue against him based on recent form and having a head start!). But at four shots back, Simpson will have the belief, is rested and more importantly has the game to potentially score and weave his way to the top of the leaderboard. Smart money on DJ but value bet is Simpson. Should be in the mix come Sunday challenging for the coveted title.