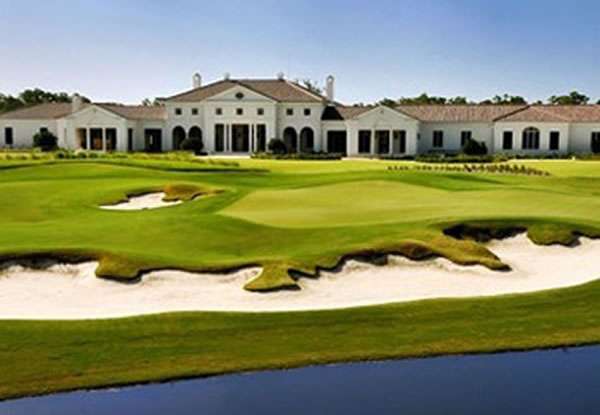 This week’s WGC event was inaugurated in 1999 and is one of the four annual World Golf Championships. It is sanctioned and organised by the International Federation of PGA Tours.

The prize money is official money on both the PGA Tour and the European Tour.

From the start of the FedEx Cup in 2007, the tournament was played on the Blue Monster at Doral. In 2017 the event moved to Club de Golf Chapultepec in Mexico City as part of a seven year agreement. The host of this week’s WGC event is The Concession Golf Club in Bradenton, Florida.

The WGC Workday Championship at The Concession has a field of 72 players based upon the following criteria:

The WGC Workday Championship will kick off a four-week Florida Swing that includes the Arnold Palmer Invitational, The PLAYERS Championship and The Honda Classic.

The Concession Golf Club was the brainchild of Tony Jacklin. It was inspired by the famous act of sportsmanship during the 1969 Ryder Cup at Birkdale. The famous final-putt concession from Jack Nicklaus to Jacklin resulted in the first tie in the tournament’s history.

The concession by Nicklaus is acknowledged by the golfing fraternity as the most selfless act of sportsmanship that professional golf has seen.

“I don’t believe you would have missed that, but I’d never give you the opportunity in these circumstances”

The Concession Golf Club is set on 520 of ruggedly pristine land. Jacklin convinced Nicklaus to handle the design while he would offer design suggestions. The design goal was to create a course where tournament conditions were the norm set among the spectacular natural landscape.

The 7,474 yard Par 72 meanders through a variety of landscapes including meadows, wetlands, oak and pine forests. It has spectacular bunkering and challenging green complexes. The greens have plenty movement and a variety of hole locations that require a great deal of strategy. Nicklaus had been working on The Concession at the same time he and Tom Doak were doing No. 39 Sebonack. Jack later admitted the small, heavily-contoured greens at The Concession were inspired by those at Sebonack.

It is a typical Jack Nicklaus design, fair off the tee with shot values increasing as you get closer to the green. The fairways at The Concession are generous, however, the green complexes are well guarded by traps and feature severe slopes, ridges, mounds and closely mown aprons. Near misses on approach shots will bound down into collection areas leaving tough bump and run or flop shots back up to pin locations.

Finding the right portion of the tricky contoured greens with approach shots will be crucial for scoring.

There is no cut at the WGC Workday Championship so an aggressive strategy is required this week. Accurate iron play on approach will be key and the ability to capitalise with good scoring on the Par 5s will be important

Withdrawn Patrick Cantlay 18/1 (E/W) – easy to forget that he is already a winner on Tour this season with a victory at the ZOZO Championship. The tournament was played at Sherwood Country Club which is also a Jack Nicklaus design. He has teed it up 5 times since his win, finishing no worse than T17. This includes a solo 2nd at the American Express and a T3 at the AT&T Pebble Beach Pro Am. A rock solid all-round game puts him comfortably inside the Top 10 in this week’s Stats Analysis. The FedEx Cup Points leader is also 7th on Tour for SG:Tee-To-Green and 12th for Scoring Average. With course form redundant this week, emphasis shifts to the other key areas of Current Form and Stats – two areas where he doesn’t disappoint. The world No.8 ranked golfer continues to manufacture one superior performance after another.

Tony Finau 20/1 (E/W) – yes you guessed, sticking with the big hitter from Utah again this week. Owes nothing from his place finishes in both the Farmers Insurance Open and again in last week’s Genesis Open. Throw in a solo 4th at the American Express and a T2 at the Saudi International, only goes to highlight that his form is seriously red-hot at the moment. No surprise to see the talented golfer feature inside the Top 10 in this week’s Stats Analysis. He is also 5th on Tour for both SG:Tee-To-Green and Scoring Average. Will there be scar tissue after last week’s narrow miss? Yes, but he is a consummate pro and more importantly mentally strong. The ‘extra’ room off the tee this week will be a plus. Value of tee-to-green game will increase this week with unfamiliar greens serving as targets, another plus. Form is too hot to ignore.