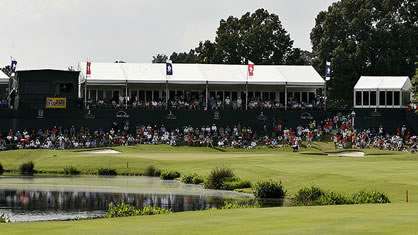 The rebranded FedEx St Jude Classic debuted in May 1958 as the Memphis Open and is played annually in Memphis, Tennessee. TPC Southwind has served as tournament host since 1989.

Since 2007, the FedEx St Jude Classic preceded the US Open. However, with the tournament’s new elevated status, it becomes a ‘marquee-event‘ on the Tour calendar and now attracts the very best golf professionals from around the world.

TPC Southwind stands out as one of the more gruelling tee-to-green tests on the PGA Tour schedule. It is a 7,200+ yard Par 70 that was designed by Ron Prichard with Hubert Green and Fuzzy Zoeller as player consultants. Each of the holes was meticulously crafted to balance ‘play-ability’ with strategy.

The course was remodeled in 2004 with new bunkering, additional trees planted, fairways re-contoured and narrowed and over 200 yards added in length. The Par 5 fifth was converted to a Par 4 reducing the overall par to 70. Water is in play on 10 holes and half the holes are dog-legs.

TPC Southwind continually ranks as one of the most challenging tracks for both Driving Accuracy and Greens in Regulation. Greens are smaller than the Tour standard and are undulating which translates into smaller target areas and tricky pin positions.

Players will miss greens and an important statistic to look at this week is Scrambling and Bogey Avoidance. It stands out as a track than should suit the experienced and patient professional.

Last year, Brooks Koepka won by three strokes from Webb Simpson to capture the WGC FedEx St Jude Invitational. He closed with a bogey free -5 (65) to finish -16 (264) for the week. It was his seventh PGA Tour title and first WGC win.

“Everything just kind of comes if you just let it happen, just stay patient and if you keep playing well, put yourself in contention, a lot of good things will happen”

In 2017, Daniel Berger successfully defended his title finishing the week on -10 (270), one stroke ahead of the chasing pack. Seven players finished within two strokes of the lead. Berger had this to say after the final round;

“I’m extremely proud. I’m 1-for-1 defending titles, so that’s a pretty good stat. I just battled so hard today and played so good. I just can’t be happier”

Scoring this week is as much about avoiding bogeys as it is finding birdies.

Daniel Berger 28/1 (E/W) – tops this week’s Event Form table thanks to back-to-back victories at TPC Southwind in 2016 and 2017. Has five Top 10’s from twelve starts this season including a victory at the Charles Schwab Challenge. Places 2nd in this week’s Stats Analysis which is no mean feat considering the field strength for this week’s WGC event. The Florida native is also 13th on Tour for Strokes Gained Putting and 7th for Scoring Average. Statistically balanced, it is no surprise that his skill set is a perfect fit for TPC Southwind. Is as consistently strong as anyone teeing it up this week. What’s not to like?

Abraham Ancer 50/1 (E/W) – third look at TPC Southwind with his previous visits yielding a MC (2019) and a T18 (2016). Has two runner-up finishes among four Top 10’s so far this season including a solo 2nd at the RBC Heritage. A strong all-round game puts him in the Top 5 in this week’s Stats Analysis. Earlier this season he finished T4 in the WGC HSBC Champions and T12 in the WGC Mexico Championship, so won’t be phased by the event status and the top pros that it attracts. Ignore lacklustre track record at TPC Southwind as his game has since matured nicely. Looks dangerous to contend just off radar at juicy each way odds.