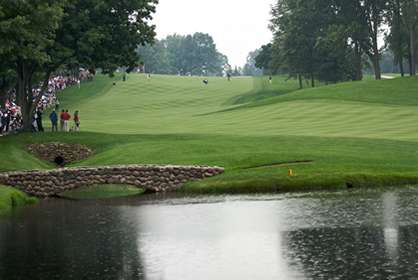 The event was established in 1999 as a successor to the World Series of Golf.

Bridgestone took over from NEC as title sponsor for the tournament in 2006. This year marks the final year that the tournament will be held at the South Course at Firestone Country Club in Akron, Ohio.

Next year the WGC event will be held in July at TPC Southwind in Memphis as the WGC FedEx St. Jude Invitational (replacing the FedEx St. Jude Classic).

The South Course was designed by Bert Way and opened for play on August 10, 1929. A major redesign by Robert Trent Jones in 1960 added over 50 bunkers, two ponds and brought the course up to 7,189 yards. The course was further redesigned by Golforce in 1985.

Noted for its length, the course played at 7,400 yards for the 2013 edition of the tournament. The Par 70 layout includes a series of intimidating, long Par 4 holes and one of the longest Par 5’s anywhere. The 16th hole plays to 667 yards and a pond in front of the green captures its share of errant shots.

At 7,400+ Firestone CC is the longest Par 70 on the PGA Tour and not surprisingly Driving Distance is important. However with a premium on hitting greens Driving Accuracy is also key. A good place to start when trying to profile an identikit winner is Total Driving followed as always by Greens in Regulation. This combination tells us that Firestone is a ball-strikers track.

A razor sharp short game won’t go astray either. Players will need to scramble well and have a better than average week with the flat-stick.

Last year’s winner, Hideki Maysuyama delivered a ball-striking master-class on his way to victory. He topped the field for Strokes Gained Tee-To-Green, gaining a mouth-watering 14.936 strokes against the field average. He closed with a bogey-free -9 (61) to tie the course record and bag his second WGC event.

In 2016, Dustin Johnson won on the strength of a superb all round game. He led the field for the tournament in Ball String, Proximity-to-the-Hole and Par 4 Scoring. His putting complimented his ball-striking finishing the week T10 for Putts per Round which yielded a total of 16 Birdies (1st).

Firestone is a course that suits a player with superior ball-striking skills and in particular those who drive the ball long and well from the tee. This week is all about hitting greens in regulation and minimising unforced errors.

Xander Schauffele 40/1 (E/W) – finished T13 in his debut appearance in Akron last year. His Current Form is what catches the eye. He book ended a T21 at The Greenbrier with a T6 in the US Open and a runner-up finish at Carnoustie. Despite uninspiring stats he still manages to feature just outside the Top 30 in this week’s Stats Analysis. Putting together one superior performance after another. Confidence is brimming and looks dangerous to contend at favourable each way odds.