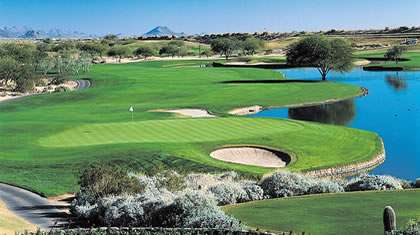 The Waste Management Phoenix Open at TPC Scottsdale is dubbed “The Greatest Show on Grass” and has no problem living up to its name. In addition to playing host to the biggest names in the game, the tournament is the PGA Tour’s best-attended event – drawing nearly 500,000 enthusiastic spectators each year.

Formerly known as The Phoenix Open and FBR Open, the event has been hosted by the TPC Scottsdale Stadium Course since 1987. Unlike other tournaments, spectators become central to the Waste Management Phoenix Open, helping to transform the famous 16th hole into “The Coliseum” – the loudest hole in golf.

In 2014, under the supervision of architect Tom Weiskopf, the City of Scottsdale carried out an extensive renovation of the Stadium Course . The project included;

The result was a more aesthetically pleasing resort for guests and strategically more challenging for the professionals.

Course knowledge around TPC Scottsdale is a plus and those with solid Event Form should be given due consideration. It is a ball strikers course and all aspects of a player’s game needs to be in tune.

The big hitters will have a slight advantage on the gettable Par-5 15th and the driveable Par-4 17th. However, water is in play on both these holes so errant tee shots will be punished. Hitting plenty Greens in Regulation is key for success.

Last year, Brooks Koepka ended an 18-month winless drought to capture his 8th PGA Tour title at the 2021 Waste Management Phoenix Open. The Florida native started 5 shots back entering the final round. He fired a -6 (65) to finish the tournament on -19 (265), one stroke clear of K.H. Lee and Xander Schauffele. It was his second victory at the Waste Management Phoenix Open having captured the title at TPC Scottsdale back in 2015.

“I went through it mentally. I think that’s probably the toughest thing, where you don’t know if you’re ever going to be the same competitor that you were. You go through some real dark places, and it’s not a fun place to be.”

Ball-striking was key to the victory and in particular his approach play. He finished 11th in Strokes Gained Off-The-Tee and 2nd in Strokes Gained Approach-The-Green. Combined, these stats accounted for a gain of 8.727 strokes or nearly three-quarters of his overall gain for the tournament. Other stats for the week include T48 Driving Accuracy, 10th Driving Distance, T1 in GIR and 18th in Strokes Gained Putting.

In 2020, Webb Simpson captured the Waste Management Phoenix Open for his sixth PGA Tour title and first since the 2018 Players Championship. The North Carolina native birdied the final two holes of regulation play to force a playoff with Tony Finau. A 10-foot birdie on the first playoff hole was enough to secure victory.

In 2019, California native, Rickie Fowler secured his 5th PGA Tour victory and first in nearly two years by winning the Waste Management Phoenix Open. It was a tournament where he was twice beaten in a playoff. A bizarre triple bogey on No. 11 looked to have derailed his chances of securing the elusive victory.

However, Fowler birdied two of his final four holes for a final round +3 (74) which was enough for a two stroke victory over Branden Grace. He finished on a total -17 (267) having preceded the final round with rounds of 64-65-64.

“I didn’t think it would be easy, but the way I was playing this week, I thought it would have been easier, it was kind of grind it out. I had a couple of tough breaks and had to deal with the punches, a couple big ones, but it feels good now”

Fowler’s putter accounted for nearly two-thirds of his strokes gained on the field average topping the pile for the SG:Putting (9.539 strokes) category. His play from the tee box was not too shabby either finishing 3rd for SG:Off-The-Tee (5.639 strokes). Other stats for the week include T3 in Driving Accuracy, 11th for Driving Distance, T13 in GIR and T6 for Putts per GIR.

The 2018 champion, Gary Woodland, birdied three of the last four holes to finish the week -18 (266) and earn a playoff with fellow Kansas native Chez Reavie. A par on the first hole of a sudden death playoff was enough to get the job done and earn his third PGA Tour victory.

Woodland’s play from the tee and in particular on approach laid the foundation for his win. He averaged nearly a 2-stroke gain on the field average per round in the Strokes Gained Approach-The-Green category. Other stats for the week include T19 in Driving Accuracy, T7 for Driving Distance, 4th in GIR and 16th in Strokes Gained Putting

In 2017, Hideki Matsuyama prevailed winning his second PGA Tour title of the season and fourth overall. He is the sixth player to successfully defend the title having won the year previous. He won on the fourth hole of a playoff outlasting Webb Simpson with a birdie putt on the short Par-4 17th. Matsuyama finished the week T6 in Driving Accuracy, T19 for Driving Distance, T2 in GIR and a mediocre 47th in Strokes Gained Putting.

2016 saw Rickie Fowler let a two shot lead slip away on the Par 4 17th hole when he hit a driver through the green and into the water. This opened the door for Hideki Matsuyama who went on to capture the title in a dramatic four hole playoff.

Matsuyama finished the week 35th in Driving Distance, T44 for Driving Accuracy, 1st for GIR and 16th for Scrambling. His ball-striking delivered the lions shared of his strokes gained on the field average finishing 10th in Strokes Gained Driving and 5th in Strokes Gained Approach.

The 2015 winner, Brooks Koepka, beat Hideki Matsuyama, Bubba Watson and Ryan Palmer by one stroke finishing on a score of -15(269). He finished the week inside the Top 10 for Driving Distance, GIR and Scrambling. He was T18 in Strokes Gained Putting racking up an Eagle and 18 Birdies. He squared only 4 Bogeys for the tournament.

Hideki Matsuyama 16/1 (E/W) – has excellent history around TPC Scottsdale with back-to-back victories here in 2016 & 2017. His form this season is equally impressive. The 29 year old is already a multiple winner with victories in the ZOZO Championship and Sony Open. The FedEx Cup points leader also comfortably places inside the Top 10 in this week’s Stats Analysis. The tee-to-green machine checks all the boxes emphatically this week. PGAgolfbets tipped the Japanese maestro at 16’s in the Sony Open, happy to take him again this week at the same odds. Way too hard to ignore.

Tony Finau 33/1 (E/W) – his playoff lost here to Webb Simpson in the 2019 edition of the tournament was preceded with a string of MC’s. Having a very mediocre season by his standards with a string of nondescript results from six starts. His Strokes Gained Off-The-Tee and Approach-The-Green are on point however his stats with the flat-stick are abysmal at best. So what’s the rationale for picking the big-hitter from Utah? There is no coherent argument that can be made for picking him. Call it a hunch. Too good a golfer not to find his way back to the big-stage and this week is as good as any to set his season alight.