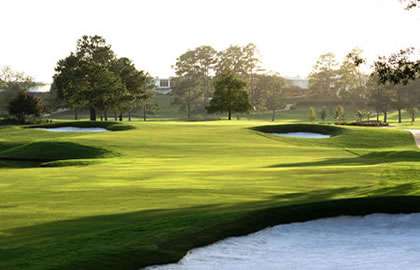 The Sandersons Farm Championship is played annually in Mississippi. The tournament has been part of the PGA Tour schedule since 1968.

From 1999 to 2006, the tournament was known as the Southern Farm Bureau Classic, from 2007 to 2011 as the Viking Classic and in 2012 as the True South Classic. The current tournament sponsor, Sanderson Farms, took over sponsorship in 2013 and is one of the United States’ leading food corporations based in Mississippi.

Historically, the tournament was played opposite one of the Majors or a WGC event and was deemed an “alternate event” on the PGA Tour. However, last year the tournament was elevated to a full-field, stand-alone event on the Tour. The winner receives the full benefits of a regular PGA Tour event, with 500 FedEx Cup points and an invitation to The Masters.

The Country Club of Jackson opened in 1914. It is a private club with 27 holes comprising three sets of nine holes, Dogwood, Azalea and Cypress. Dogwood and Azalea combine for the championship course with Dogwood serving as the opening nine holes. The championship layout measures 7,421 yards from the back sticks.

Originally designed by Dick Wilson, John Fought redesigned the championship course in 2008/09. The remodeled layout can be best described as a parkland style routing with smallish, tricky greens. The green complexes vary in size 5,000 to 8,500 square feet and are often sitting-up with testing run-off areas.

Last year, Sebastian Munoz captured his maiden title in the Sanderson’s Farm Championship. He closed with a -2 (70), which included a 15 foot birdie on the 18th to force a playoff with Sungjae Im. Munoz won with a par on the first extra hole for the win.

Click here for a breakdown of Munoz’s strokes gained breakdown on his way to his maiden PGA Tour victory.

In 2018, a 23 year old Cameron Champ won the Sandersons Farm Championship in only his ninth start on Tour. The big-hitter from California birdied five of the last six holes to win by four strokes from Corey Connors.

“The front side, there were some nerves, but on the back side I brought it all together and finished strong. It was awesome.”

Champ signed for a final round -4 (68) to finish on a total of -21 (267) for a wire-to-wire victory. A red-hot putter laid the foundation for his victory. While not particularly accurate from the tee box, his distance off the tee averaged out at 334 yards, finishing the week 1st for Driving Distance.

Sam Burns 28/1 (E/W) – best finish at the Country Club of Jackson is a T3 in the 2018 edition of the Sandersons Farm Championship. Followed up a T7 at the Safeway Open with a T28 in last week’s Corales Championship. A third round +6 (78) at the Puntacana Resort derailed his chances and spoiled rounds of 66, 67 and 69. He finished the tournament T4 for Driving Accuracy, 7th for Driving Distance, T4 for GIR and T2 for Birdies shooting 22 in total. Places just outside the Top 10 in this week’s Stats Analysis (based on last season’s statistics). Has the perfect combination of power from the tee and touch with the putter. The big-hitting 27 year old from Louisiana is a perfect fit to get the job done this week.

Adam Long 35/1 (E/W) – third look at the Country Club of Jackson with his best finish a T23 in last year’s edition of the tournament. Followed up a T13 in the US Open with a solo 5th in last week’s Corales Championship. The 54-hole leader at the Puntacana Resort finshed the week T14 for Driving Accuracy, T16 for GIR and T9 for Birdies shooting 20 in total. Despite his weak Driving Distance stats, he still manages to squeeze inside the Top 30 in this week’s Stats Analysis which is testament to the rest of his game. His steady and impressive run demands attention. Zero reason to expect a letdown based on skill set and Current Form.