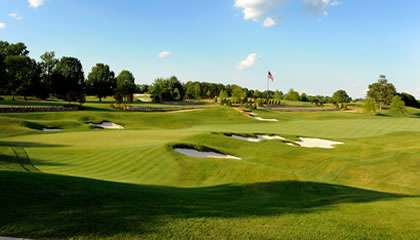 The Quicken Loans National is one of only five tournaments given “invitational” status by the PGA Tour and consequently it has a reduced field of only 120 players (as opposed to most full-field open tournaments with a field of 156 players).

From the tournament’s inceptionin 2007, it has predominantly been played at Congressional Country Club. In 2010 and 2011 the tournament moved to Aronimink GC and in 2015 the Robert Trent Jones (RTJ) Golf Club in Gainesville, Virginia was used.

The tournament returned to Congressional in 2016 before moving to TPC Potomac at Avenel Farm last year.

TPC Potomac opened for play in 1986. In 1987 the Kemper Open (which later became known as the FBR Capital Open and Booz Allen Classic) moved from Congressional to TPC Potomac. The course played host for the tournament for 19 of the next 20 years.

Notable winners at TPC Potomac include Lee Jansen (1995), Adam Scott (2004) and Steve Stricker who won his first PGA Tour title here in 1996. Ben Curtis won the final Booz Allen Classic at TPC Potomac in 2006 on a score of -20.

From the off the course was plagued by years of flooding and drainage problems. There was also issues which affected the greens producing less than satisfactory tournament conditions. This prompted a multi-million dollar renovation of the course by the PGA Tour in 2008.

The layout underwent a significant renovation to bring the course up to PGA Tour standards. The course was virtually re-built from scratch. Greens and fairways were completely rebuilt and all holes were regraded to create more natural contours. There was also a reduction in fairway widths. There was a complete re-design of holes 10, 11 and 13. The renovation also included the re-building of all bunkers and the installation of a state-of-the-art irrigation system.

At the time of renovation, the course was renamed TPC Potomac at Avenel Farm and the new Par 70 design was extended to 7,139 yards from the back sticks.

Following the renovation project, TPC Potomac hosted the 2010 Constellation Senior PLAYERS Championship and the Web.com Tour’s Mid-Atlantic Championship in 2012 and 2013. The average winning scores for these tournaments was -8 which is a marked difference to the winning score of Ben Curtis (-20) in 2006.

In last year’s edition of the Quicken Loans National, Kyle Stanley emerged victorious after beating Charles Howell III in a playoff. He finished the week on a score of -7 (273). This would suggest that the re-design has produced a tight and tricky layout that emphasies the importance of good ball-striking.

As always with a ‘relatively new’ course entering the PGA Tour rota it is hard to find an angle in. The ‘unfamiliarity-factor’ will test all aspects of a player’s game. The layout is a solid all-round test of golf and in particular players will need to putt and scramble well.

Accuracy off the tee will be a plus and the ability to capitalise on good scoring when it presents will be important. As always, expect players in the mix this week to have a healthy percentage of greens in regulation with first class putting.

Francesco Molinari 20/1 (E/W) – finished a very respectable T25 in his last outing on Tour, the US Open. He prefaced that on the European Tour with a T2 in the Italian Open and prior to that a victory in the BMW Championship. A very efficient game tee-to-green will stand him in good stead around TPC Potomac. His short game deficiencies won’t be as pronounced this week as you don’t need to putt brilliantly to get the job done here – ‘good enough putting’ will do. The Italian will be arriving in bouyant mood to a course that should fit right in his ‘wheel-house’.