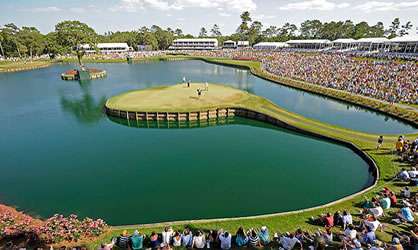 The Players Championship began in 1974 and it is the flagship event on the PGA Tour. It is often referred to as the unofficial “fifth major” due to its prestige.

The tournament offers the highest prize fund of any event on the PGA Tour with the winner pocketing a cool $2.7M. The host course is the TPC Stadium Course at Sawgrass which was constructed in 1980. It was created specifically for the purpose of hosting this event and has been the tournament’s home since 1982.

TPC Sawgrass is a Pete Dye design that requires an accurate game. It is a standard issue Par 72 (36-36) that can stretch 7,215 yards. The iconic Par 3 17th, with its dramatic island green, is one of the most recognised holes in golf. It is a fine line between success and failure on this hole and can often dictate the outcome of the tournament.

In 2006 all the tees, fairways and greens were stripped and new drainage, irrigation and sub-air systems were installed. The result is that the firmness of the smaller than average sized greens can be controlled in any weather conditions.

Course experience around Sawgrass is essential and recent champions required numerous appearances prior to their victories. Winners here tend to finish in the Top 10 for Greens in Regulation as well as featuring strongly for Total Driving. This permutation tells you that the course is a good test of golf that suits ball strikers. History also tells us that scoring on the set of four Par 5s is crucial. Scrambling is also a key statistics to consider this week.

The 47th edition of The Players Championship was canceled after round one in response to the COVID-19 pandemic. Hideki Matsuyama held a two stroke lead after the first round having equaled the course record of -9 (63). Half the $15 million purse was split equally among the players who competed, giving each golfer a $52,000 share of the money

In 2019, Rory McIlroy closed with final round -2 (70) to capture the coveted Players Championship. He finished on a total -16 (272) to edge out Jim Furyk by one stroke. The Northern Irishman was one of eight players to have at least a share of the lead in the final round. Birdies on the 15th and 16th were pivotal for McIlroy to get the job done having bogeyed the 14th to surrender the lead.

No surprise that it was tee-to-green which laid the foundation for the victory. McIlroy finished 1st in the SG:Tee-To-Green category gaining a mouth-watering 13.262 strokes on the field average for the week. Other stats include T49 for Driving Accuracy, 5th for Driving Distance, T3 for GIR and 45th in Strokes Gained Putting.

Webb Simpson captured the 2018 Players Championship to win his fifth PGA Tour title. Simpson was seven shots clear after the third round which is the largest 54-hole margin in the tournament’s history. He carded a final round +1 (73) which was enough to get the job done with four shots to spare. It was his first win on Tour since October 2013.

Simpson’s putting delivered almost two-thirds of his strokes gained on the field average for the week. He finished first in Strokes Gained Putting gaining 9.368 on the field. He was also 1st for Driving Accuracy, 71st for Driving Distance, T5 for GIR and 3rd for Putts per GIR.

The 2017 champion, Si Woo Kim of South Korea, became the youngest winner of the Players Championship at 21 years of age. He was the only player to go bogey free in the final round closing with a -3 (69). It was enough for a three stroke victory over Ian Poulter and Louis Oosthuizen.

The 2016 champion, Jason Day, captured the Players Championship for his third win of 2016. His impressive four-shot victory was driven by gains in all areas of his game. Putting contributed 34 percent of his total strokes gained on the field, with approach shots accounting for 31 percent and short game shots another 23 percent.

In 2015, Rickie Fowler, closed with four birdies and an eagle in his final six holes for the best finish in Players Championship history. Sergio Garcia and Kevin Kisner matched Fowler at -12 for a three-hole aggregate score playoff.

Garcia was eliminated after the three holes but Fowler and Kisner could not be separated. They played the 17th for a sudden death playoff which Fowler birdied for his first PGA Tour victory in three years. For the tournament, approach shots contributed 50 percent of Fowler’s total gain against the field with putting contributing another 25 percent.

The following table details the breakdown of the Strokes Gained in each of the strokes gained categories for each of the past three champions of The PLAYERS Championship.

Taking the average in each of the strokes gained categories yields the following “winning formula”.

The above tells us that TPC Sawgrass is a course that will test every aspect of a player’s game to the full.

Patrick Cantlay 22/1 (E/W) – this will be his fourth look at TPC Sawgrass with his best finish a T22 in 2018. Has teed it up on 5 occasions since his victory in the ZOZO Championship, finishing no worse than T17. A superb all-round game puts him top of the pile in this week’s Stats Analysis, no mean feat considering the depth of talent for this week’s ‘fifth major‘. He is also 10th on Tour for Strokes Gained Around-The-Green and 5th for Birdie Average. Withdrew from the recent WGC event due to an upset stomach and dehydration. Assuming no legacy issues from his illness, there is no reason not to expect another superior performance this week. His red-hot-form prior to the WGC coupled with his skillset makes the California native very hard to ignore.

Sungjae Im 45/1 (E/W) – sticking with the South Korean golfer again this week. Missed the cut last year on his debut appearance at TPC Sawgrass. Has five Top 30 finishes from seven starts in 2021 including a T21 in last week’s Arnold Palmer Invitational. Around Bay Hill he was T3 in Driving Accuracy and 2nd in Strokes Gained Putting. Statistically balanced, he just squeezes inside the Top 30 in this week’s Stats Analysis. His accurate play from the tee will be a plus this week and if brings his putting form to Ponte Vedra, then he could be in the mix. His lack of experience around Sawgrass is slightly worrying, but that said, he has the both the ability and confidence to get the job done this week. Good each way chance.