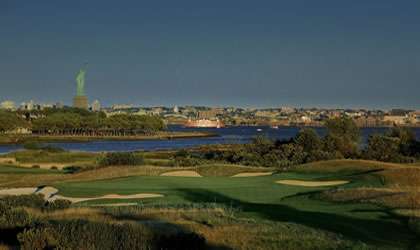 This year the FedEx Cup Playoffs are reduced from four events to three. The Playoffs feature a progressive cut, with fields of 125 for The Northern Trust, 70 for the BMW Championship and 30 for the Tour Championship.

The Northern Trust will cut the field to low 70 and ties after 36 holes, while the BMW Championship and Tour Championship are no-cut events.

The first two Playoff events award 2,000 points to the winner (quadruple points of regular season events), while the Tour Championship, features a strokes-based system called the FedEx Cup Starting Strokes for the first time this year.

The player with the lowest aggregate score over 72 holes when combined with his FedEx Cup Starting Strokes will win the Tour Championship and also be crowned FedEx Cup Champion.

The Par 71 course opened for play in 2006 and can stretch to 7,353-yard from the championship tees. It is reported to have cost over $250M to build, making it one of the most expensive golf courses in history.

Tom Kite and renowned golf course architect Bob Cupp, collaborated on the design. Cupp had previously worked for Jack Nicklaus for over 15 years as a senior designer. The course has the enviable backdrop of both the Statue of Liberty and the Manhattan Skyline.

“You need to drive it fairly straight at Liberty National, and the greens are such that if you don’t drive it straight it is tough to get to the pin. What I try to do is not have any one part of the game dominate. I don’t want it to be just a putting course or just a bombers course. I want you to be rewarded for length, accuracy, iron shots, chipping and bunker shots. And, of course, putting will always be there”

The feedback after the 2009 Northern Trust from the pros was mixed to say the least. Most had issue with the greens and Tiger commented that;

“I don’t think we’ve ever played greens with this much movement, about half your putts were double breaking”

Unsurprisingly, after all the negative feedback, changes have been made to 15 of the 18 holes. The greens were partially levelled, fairways widened and there were changes made to some of the bunkering.

Liberty National has a links feel and good course management will be key, particularly if the wind gets up. With unfamiliar greens serving as targets, Strokes Gained Tee-To-Green will be a key consideration. Players will need to drive well and iron play on approach will need to dialled-in.

As you would expect from the FedEx Cup Playoffs this is a top-class field with a wealth of talent. Those in tune with distance and accuracy who sink their fair share of putts should thrive.

Patrick Cantlay 22/1 (E/W) – has good history in The Northern Trust with two Top 10’s in as many starts (T10 at Glen Oaks & T8 at Ridgewood CC). Has a victory, a runner-up and two 3rd place finishes among eight Top 10’s this season. Finished T12 in his last outing in the WGC FedEx St Jude Invitational. Statistically off-the-charts, he comfortably tops this week’s Stats Analysis table – no mean feat considering this week’s playoff line-up. No reason not to expect another standout performance and add to his Memorial victory in June. Hard to ignore when all things considered.

Webb Simpson 25/1 (E/W) – a regular starter in The Northern Trust, his best result in the recent past is a T6 at Glen Oaks in 2017. Arriving hot to Liberty National with runner-up finishes in each of his last two outings, the WGC FedEx St Jude Invitational and Wyndham Championship. Around Sedgefield CC he was 11th in SG:Putting and 5th for SG:Tee-To-Green. A zero red flag game puts him comfortably in the Top 5 in this week’s Stats Analysis. Event Form tick, Current Form tick, Stats Analysis tick. Standout pick.