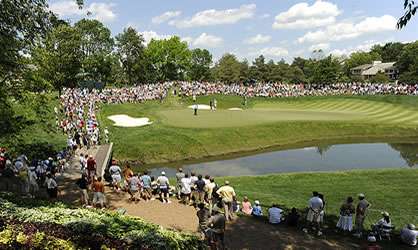 The Memorial Tournament was founded in 1976 by Jack Nicklaus and is played at Muirfield Village Golf Club in Dublin, Ohio.

One of the main features of the tournament is a yearly induction ceremony honouring past golfers. A plaque for each honouree is installed near the clubhouse at Muirfield. Nicklaus himself was the honouree in 2000.

In June 2014, the PGA Tour approved a resolution to grant the winner a three-year playing exemption, one more than other regular Tour events and on a par with winners of the World Golf Championships, The Tour Championship and the Arnold Palmer Invitational.

Muirfield Village GC is a 7,300 yard+ Par 72 with 71 bunkers and water in play on 11 holes. Like most of Nicklaus’ designs the challenge increases as you near the hole. Muirfield Village is a proper test of golf and a good warm-up event for the US Open. The fairways are fairly generous but the rough is demanding.

The greens are tough and it’s a tricky place to get up-and-down. This is again one of those weeks where accuracy will win over power and a good scrambling game won’t go astray. Expect players in the mix to have a healthy percentage of greens in regulation with first class putting and a low scoring average on the four gettable Par 5s.

Last year, Patrick Cantlay captured his second PGA Tour title wining by two strokes from Adam Scott. He closed with an impressive bogey free final round -8 (64) to finish on a score of -19 (269) for the week.

It was Cantlay’s first victory since winning the Shriner’s Hospitals Open in November 2017 and earned him a handshake from tournament host and 18-time major champion Jack Nicklaus.

“It’s been a while since I’ve won and being able to win on this golf course, a golf course I really like in front of Jack, making that putt on the last hole, I can’t tell you how good it feels”

Check out Cantlay’s strokes gained breakdown from the 2019 edition of the Memorial Tournament here.

In 2018, Bryson DeChambeau emerged victorious, beating Byeong Hun An and Kyle Stanley in a playoff. DeChambeau, the 54 hole leader, bogeyed the last hole for a final round -1 (71) and -15 (273) overall. It was his second win on Tour having won the John Deere Classic the previous year.

Check out how DeChambeau secured victory with a breakdown of his strokes gained for the tournament.

The 2017 winner, Jason Dufner, captured the title by 3 strokes from Anirban Lahiri and Rickie Fowler for his 5th PGA Tour victory. He joined tournament host Jack Nicklaus as the only Ohio-born winners of the Memorial.

On his way to victory, Dufner set the 36-hole scoring record but undid much of his good work with a +5 (77) on the Saturday. A final round -4 (68) with two lengthy weather delays, was enough to get the job done.

Check out the strokes gained breakdown here for Dufner in the 2017 Memorial Tournament.

In 2016, William McGirt won in a play-off against Jon Curran to secure his first PGA Tour title. He finished with a bogey free final round 71 on a score of -15(273). McGirt ended the week 50th in Driving Distance, T39 in Driving Accuracy, T7 in GIR and 55th in Putts per GIR.

Webb Simpson 22/1 (E/W) – hasn’t teed up at Muirfield since 2017 when he finished T67. In eight starts this season he has two wins (WM Phoenix Open and RBC Heritage) and a further four Top 10’s. Enjoying a stellar season and no surprise to see him feature 3rd in this week’s Stats Analysis. He is also 20th on Tour for Driving Accuracy, 9th for GIR and 1st for Birdie Average. Okay to dismiss a lacklustre history at Jack’s place based on other very compelling arguments.His game has scaled into unchartered territory and zero reason to expect a letdown this week. Best value by far at the top end of the market. Hard to ignore.

Gary Woodland 40/1 (E/W) – sticking with Woodland again this week. Finished T5 in last week’s Workday Charity Open at Muirfield Village. He finished the week 7th in SG:Off-The-Tee, T9 in GIR and an eye-catching 3rd in SG:Putting. Has six Top 10’s from twelve starts this season including last week’s T5 and a solo 9th in the Charles Schwab Challenge. Features in the Top 10 in this week’s Stats Analysis which is testament to his game considering the field quality. Greens will be racheted up a notch or two on the stimpmeter for this week’s tournament. In this regard the preeminent ball-striker’s performance with the falt-stick last week is noteworthy. Will relish the challenge that this week presents particularly in terms of field strength. Ticks a lot of boxes.