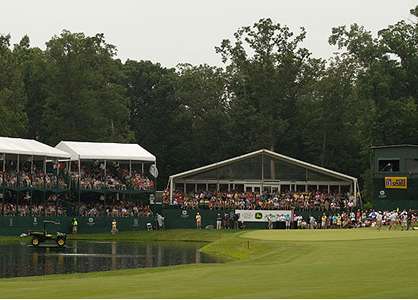 Since 2000 the event has been played at TPC Deere Run which was designed as a stadium course by DA Weibring. The course is a Par 71 that stretches to 7,200+ yards from the championship tees. Historically the John Deere Classic is played the week before the British Open.

In 2005 and 2006 the tournament generated much attention due to a sponsor’s exemption given to Michelle Wie. In 2013 Jordan Spieth was victorious two weeks before his 20th birthday to become the first teenager to win on the PGA Tour since 1931.

The John Deere Classic is a birdie-fest, plain and simple. Go low or go home

TPC Deere Run continually ranks among the easiest Par 71s on Tour and annually yields high percentages for both fairways hit and greens in regulation. How far and in which direction you hit the ball off the tee is basically immaterial. It is all about aggressive play, accurate short irons and good putting.

The John Deere Classic is the final chance for a player, not already exempt, to earn a tee-time at the British Open if he finishes in the Top 5. In order to help attract players who will compete in the British Open, the tournament sponsor charters a flight that leaves the Quad Cities on Sunday night to travel to the year’s final Major.

Brian Harman 28/1 (E/W) – a past champion around TPC Deere Run, he won here in 2014 on a score of -22 (262). A Top 10 in both the Travelers Championship and again in last week’s 3M Open is enough to put him inside the Top 5 in this week’s Current Form table. Statistically uninspiring (underlined by his mediocre season), the ‘leftie’ looks to be on an upswing based on recent results. Will fancy his chances this week based on ‘past-feel-good-factor‘ and new found form.

Wyndham Clark 45/1 (E/W) – his last three results read T15 Travelers Championship, T17 Rocket Mortgage Classic and T5 in last week’s 3M Open – placing him comfortably inside the Top 10 in this week’s Current Form table. In his last 12 competitive rounds he has shot 11 in the 60’s. Thanks to his putting he features inside the Top 30 in this week’s Stats Analysis table. He is also 4th on Tour for Driving Distance, 7th for SG:Putting and 8th for Birdie Average – key attributes this week. Looks to be good value based on recent form and stats.