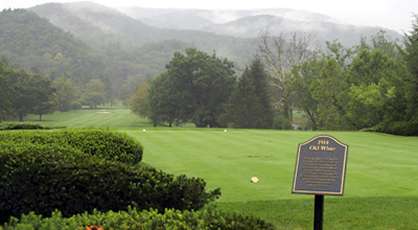 Charles Blair Macdonald designed the course and modeled several holes from some famous European holes. No. 8 hole was styled after the Redan at North Berwick, No.13 after the Alps at Prestwick and No.15 after the Eden at St. Andrew’s.

From 2001-2006 Lester George restored The Old White TPC Course bringing back many of the features of the original design. The course joined the TPC network of courses in March 2011.

The Old White TPC has hosted seven editions of the Greenbrier Classic. The 2016 edition of the tournament had to be cancelled due to the severe flooding after record rainfalls throughout West Virginia that year.

In the inaugural Greenbrier Classic tournament in 2010, Stuart Appleby carded a 59 in the final round winning the tournament on -22 (259). In response the course was lengthened to the current 7,200+ yard with extensive changes. The course has only two Par 5s which are both on the inward nine so the Par 70 card reads 34–36.

The one common denominator that has featured in each edition of the Greenbrier Classic is putting. The last five champions Kevin Na (2018), Xander Schauffele (2017), Danny Lee (2015), Angel Cabrera (2014) and Jonas Blixt (2013) all finished inside the Top 10 for Strokes Gained Putting.

On Blixt’s route to victory he was mediocre at best tee-to-green but was stellar with the putter ranking 1st for Putts per Round and 1st for Birdies. Cabrera credited his driving for his victory saying,

“It was good all week long. It made the course play a little shorter”

Cabrera’s excellent play from the tee made his approach play easier and finished 1st for Greens in Regulation for the week.

For Lee, a little more than half of his total gain on the field came from putting and a little less than half came from his approach shots.  After the round Lee said

“For some reason I just read the greens really nicely here. I feel like everywhere on the green I just feel like I can make every putt…”

In 2017, Xander Schauffele captured his first Tour victory thanks to his impressive ball-striking and putting. He topped the field in GIR and finished 6th for both Strokes Gained Putting and Strokes Gained Tee-To-Green. Schauffele closed with a -3 (67) to finish on -14 (266) had this to say after the final round;

“The US Open (2017) was a huge moment in my career, it was one of the biggest stages and for me to be calm and collected throughout the week and just kind of hang on and tie for fifth was huge for me mentally. It kind of gave me the confidence and allowed me to play to win this week”

Last year, Kevin Na ended a 7 year winless streak to win the Greenbrier Classic. He closed with a final round -6 (64) for a -19 (261) total. He finished 5 shots clear of Kelly Kraft with Brandt Snedeker and Jason Kokrak a further stroke back.

“My putter got hot. The first day the putter felt awful, and it just clicked. Every time I got over the ball it felt great, and everything felt like it was going in”

Statistics worth considering this week are Ball Striking, Strokes-Gained Putting and Par 4 Performance.

Any player with a solid tee-to-green game with an ‘above-average’ week on the greens should make some noise.

Scott Piercy 40/1 (E/W) – although a ‘regular-ish’ visitor to the Greenbrier Classic, he has no real form of note around The Old White TPC. Had 6 Top 10’s among 11 Top 25’s last season which was enough to finish 39th in the FedEx Cup standings. Tops this week’s Stats Analysis (based on last season’s stats) which is testament to the consistency he has developed in his game. This week should be a perfect fit for the ‘wiley-pro’. His experience and new found form should serve him well as he bids to make it win No.5 on Tour.

Sungjae Im 28/1 (E/W) – first look at The Old White TPC for the 21 year old, Korean golfer. Had 7 Top 10’s in a rock solid season last year, making it all the way to the Tour Championship. Finished a very respectable 19th in the overall FedEx Cup standings. Places 3rd in this week’s Stats Analysis which underlines how solid his overall game is. If his form carries over into the new season then he should contend. Best value at top end of market.