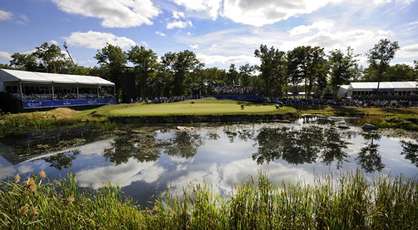 The tournament made its debut in 2003 and is held at the Tournament Players Club (TPC) of Boston in Norton, Massachusetts.

Unlike most PGA Tour events which are played Thursday through Sunday, the Dell Technologies Championship is played Friday through Monday, with the final round on Labor Day.

As part of the revamped PGA Tour schedule for next season, the FedEx Cup playoffs are being reduced from four events to three. The Dell Technologies Championship will be removed from next year’s schedule to accommodate the changes.

TPC Boston is a 7,216 yard Par 71 and was originally designed by Arnold Palmer. In 2007 Gil Hanse redesigned the course with PGA Tour player Brad Faxon serving as player consultant. It is a long but easy layout with several doglegs and fast greens that are larger than the Tour average.

Usually the easiest track of the post season playoffs the average winning score since 2007 is -18 which means it is not a catch-up course. Henrik Stenson finished on -22 (262) when he won here in 2013.

Players will have to hit the ground running so a good place to start is Birdie Average. With a premium on scoring, Par 5 Performance will also be important on the gettable Par 5’s. A player’s iron-play will need to be dialled in and hitting a high percentage of greens in regulation is a must.

Last year, Justin Thomas captured the Dell Technologies title for his sixth career win. He outlasted the field closing with a -5 (66) for a three-shot victory. He gained an impressive 11.545 strokes tee-to-green over the field average for the week. More than half this gain came from his approach play.

Thomas finished the week for T58 for Driving Accuracy, 3rd in Driving Distance, T13 for GIR and 8th in Strokes Gained Putting.

In 2016, Rory McIlroy, finished the week 1st for both Driving Distance and Putting Average. He came from six strokes back of the final round leader, Paul Casey, shooting a -6 (65) to Casey’s 73 to win by two. McIlroy was 7th in Strokes Gained Putting for the week and topped the field in Birdies shooting 24 in total.

The 2015 champion, Rickie Fowler, shot a 2-under back nine in the final round to overtake Henrik Stenson and beat him by one stroke. He won with superb putting and approach shots gaining 3.7 strokes per round against the field. Putting contributed 48 percent of the gain (2nd) and approach shots contributing 43 percent (5th).

This is one those weeks to approach with caution. With such a strong field playing on a relatively easy track it is hard to separate a likely winner from the pack. Best advice might be to have a bet in running after 18 | 36 holes have completed.

Rory McIlroy 18/1 (E/W) – excellent history in the Dell Technologies Championship with 2 x victories in 2012 and 2016. Has 5 x Top 10’s this season including a victory in the Arnold Palmer Invitational and a runner-up in the British Open. No surprise that the supremely talented Northern Irishman places in the top half of this week’s Stats Analysis table. He is also 9th for Scoring Average and heads the Tour for Driving Distance. Has found consistency again in his game but is short on victories. Taking last week off suggests that he has perhaps identified this week as a very real opportunity for a return to the winner’s circle and make it win No.3 at TPC Boston.

Patrick Cantlay 33/1 (E/W) – finished T13 last year in his debut appearance in the Dell Technologies. Has 7 x Top 10’s among 13 x Top 25’s this season including a victory in the Shriners. Placed T4 for Strokes Gained Tee-To-Green at last week’s Northern Trust on his way to a T8 finish. Features inside the Top 30 in this week’s Stats Analysis thanks to a rock solid tee-to-green game. He is also 15th on Tour for Scoring Average. Just needs to see a few putts fall to compliment his ball-striking. Has the game to mix-it-up with the ‘big boys’.

Kevin Na 80/1 (E/W) – finished T6 in last year’s edition of the tournament racking up 21 Birdies (T3) in the process. Has 4 x Top 10’s this season including a victory in the Greenbrier in July. Placed T15 in last week’s playoff opener, finishing the week 3rd for Strokes Gained Putting. A solid all-round game puts him mid-table in this week’s Stats Analysis. Arriving to TPC Boston in confident mood off the back of some solid performances. Worth a punt at these odds.