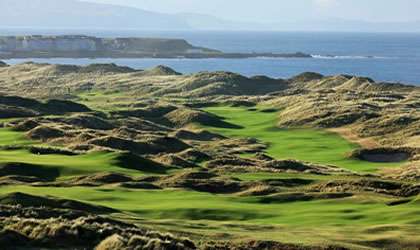 Royal Portrush Golf Club is a private golf club and the 36-hole club has two links courses, the Dunluce Links and the Valley Links. Dunluce Links will play host to this year’s 148th Open Championship.

The Harry Colt designed Dunluce Links is considered to be one of the best courses in the world. It is overlooked by the ruins of the 13th century Dunluce Castle, which gives its name to the course.

A number of course changes were made in preparation for this year’s British Open. The 17th and 18th holes were replaced by two new holes (the 7th and 8th) on land that was part of the Valley Links. Holes 7 to 16 are now holes 9 to 18 on the redesigned course. The land freed-up by removing the 17th and 18th will be used for the tented village and other hospitality structures.

Dunluce Links has several signature holes on both the front and back nine including the fourth, fifth and sixteenth holes. The fourth hole is a long par four which is more than 480 yards from the championship tees, with out of bounds right and thick rough on the left. There are several bunkers in the undulating fairway and the green is placed between two small sand hills.

The fifth hole is a relatively short downhill par four with a dogleg to the right. It has no bunkers but a heavily undulating green perched on the edge of a large drop down to the beach and has views across the White Rocks beach and Dunluce Castle.

The sixteenth hole, named Calamity, is a long 236 yard, uphill par three. It is played to a green over a huge ravine short and right, with mounds and hollows to the back and left of the green.

The Par 71 course will play at 7,337 yards from the back sticks this week. The strong winds which blow along the exposed links coast plays a huge factor in the ‘Dunluce-experience‘. The 62 bunkers throughout the course form part of the defence of this famous links with many strategically placed to capture wayward shots.

This is a course that examines every element of a player’s game. The layout demands careful strategy and nerve

Graeme McDowell, Portrush born, tees it up this week as does Darren Clarke who presented his Royal St Georges Open Championship medal to Royal Portrush, the club he adopted as his home club.

Irish players McDowell, Clarke, McIlroy and Harrington are honorary members of Royal Portrush. In 2005, Rory McIlroy shot a course record of 61 on Dunluce when he was just aged 16.

Patience will be key this week. Players will need to take their medicine after wayward shots and deal with whatever presents. There are birdie opportunities to be had around Dunluce and it will be imperative to capitalise on these when they present. An ability to play in the wind is a prerequisite. Greens will be missed so players will need to scramble well and have a better than average week with the putter.

The British Open Championship is all about being mentally tough, minimising unforced errors and capitalising on scoring opportunities when they arise

Like with all the Majors, it is worth holding back some wager money to have a bet in running after 36 or even 54 holes are completed.

Jon Rahm 16/1 (E/W) – has no form of note in past British Open Championships, that said his Current Form is the polar opposite. Has nine Top 10’s among twelve Top 25’s from fifteen starts this season. His last outing on Tour yielded a T3 in the US Open at Pebble Beach Golf Links. Fresh off a victory at the European Tour’s Irish Open played at Lahinch Golf Links on the West Coast of Ireland. A stellar all-round game puts him in the Top 10 in this week’s Stats Analysis table. He is also 15th on Tour for SG:Tee-To-Green and 11th for Birdie Average. Okay to dismiss Event Form based on other compelling variables. The stars are aligning for the supremely talented Spaniard.

Matt Kuchar 33/1 (E/W) – followed up a solo second at Royal Birkdale in 2017 with a T9 last year at Carnoustie – so Kooch knows what it takes to get around a British Open layout. Easy to forget that he has already won twice this year – both at coastal locations in the Mayakoba Golf Classic and Sony Open. A zero red flag game means he places comfortably inside the Top 10 in this week’s Stats Analysis. His accurate low ball flight will be ideally suited to the Portrush ‘wind-factor‘ if it arises. Has the mental resolve and nerve to get the job done this week. Ticks a lot of boxes.