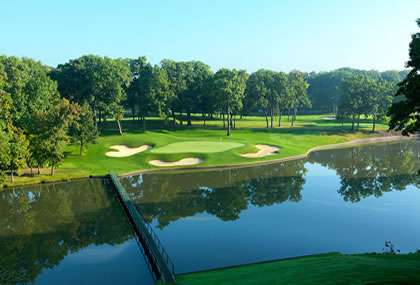 BMW Championship betting tips & predictions – the BMW Championship is the second of this year’s three events in the FedEx Cup Playoffs. The tournament determines the final field of 30 for the TOUR Championship at East Lake Golf Club in Atlanta.

The BMW Championship is contested by the Top 70 PGA Tour golfers following the completion of The Nothern Trust. As it is a reduced field event there is no cut after two days.

The Tom Bendelow designed Course #3 at Medinah Country Club in Chicago will host this year’s tournament. The championship golf course is consistently rated among the top golf courses in the United States.

Medinah is a private country club on 640 acres located just 25 miles from downtown Chicago. The club was founded in 1924 by the Medinah Shriners. Scottish golf course architect, Tom Bendelow, was retained to design the original three golf courses. Course #1 opened in September 1925, followed by Course #2 in 1926 and finally Course #3 in 1928.

Noted American golf course designer A.W. Tillinghast played a major role in the design changes to Course #3 in the 1930s. The current setup for the 54 hole golf complex at Medinah is as follows;

Tommy Armour, winner of multiple major championships was Medinah’s head professional for many years. Notable tournaments played on Course #3 include;

Rees Jones’ work in preparation for the 2006 PGA Championship extended Course #3 to 7,561 yards and at the time, the longest golf course in major championship history. For the 2012 Ryder Cup, Jones transformed the 15th hole into a drive-able Par 4. The length was reduced and a new two-acre lake created that borders the right side of the fairway and green.

The redesign of No. 15 took place concurrently with a major greens renovation project in which 11 of Course #3’s original 18 greens and its main putting green were rebuilt to US Golf Association specifications. Course #3’s other seven greens, which had been rebuilt to USGA standards in 2002, were re-grassed and the No. 15 green rebuilt.

Course #3 is parkland golf at its best. The tree lined layout while known for its length is much more than just a ‘bombers’ paradise. Players hoping to score on the famous course will need every club in their bag. Severe doglegs feature on a number of Par 4’s (in particular holes 9 & 11) where accuracy will out-trump length.

Greens are undulating and well protected and those looking to advance to East Lake will require a better than average week with the putter. Course #3 is noted for its strong set of Par 3’s. The three waterfront Par 3 holes (2, 13, and 17) are extremely challenging and in particular hole 13 which can play as long as 244 yards over water.

The course design rewards well executed shots and good strategy. The fairways are framed by trees with plenty dog-legged holes. There is also a good blend of long and short holes. The layout demands a premium on shot-making and distance control with plenty danger in the form of strategic bunkering, rough combined with trees and undulating greens.

This week should suit the player who plots his way around with good course management and a premium on hitting greens in regulation.

With such a high-class field and no halfway cut, the competition will be unrelenting in this week’s penultimate FedEx Cup playoff event.

Rory McIlroy 9/1 (Win) – has good history with the BMW Championship with three Top 10’s in the last five years including a solo 5th last year at Aronimik GC. Has 2 wins (The PLAYERS & RBC Canadian Open) and a runner-up (WGC Mexico Championship) among 13 Top 10’s from 17 starts. As you would expect from the World No.3 he has a sublime game and places second in this week’s Stats Analysis table. Features in the Top 10 for Event Form, Current Form and Stats Analysis which demands serious attention. Only doubt is his “current” inability to close out tournaments when in position. All variables considered he is the standout pick this week.

Webb Simpson 25/1 (E/W) – sticking with Simpson again this week. Followed up a T9 at Conway Farms in 2017 with a T6 at Aronimik GC last year. Cooled slightly at last week’s Northern Trust finishing T18 – prior to this he was runner-up in both the WGC FedEx St Jude Invitational and Wyndham Championship. A solid all-round game puts him in the Top 3 in this week’s Stats Analysis. Remains as consistently strong as anyone in this week’s field. With recurring appearances on leader-boards over the last number of week’s, the time is now to step up and convert.