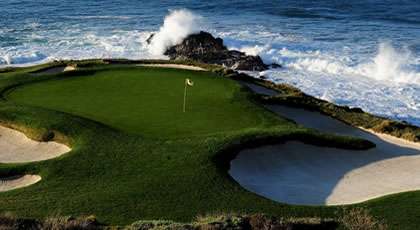 The PGA Tour returns to the California coastline for the AT&T Pebble Beach Pro-Am. A field of 156 professionals will play a rotation of Pebble Beach, Spyglass Hill and the Shore Course at Monterey Peninsula Country Club.

One professional is paired with one amateur. Everyone will play each course once before a 54-hole cut. The low 60 professionals and ties advance to play the final round at Pebble Beach. Since the tournament moved to the Monterey Peninsula in 1947, the final round action has always been played on the famous holes of Pebble Beach. The Top 25 amateur teams will also advance to play for the pro-am title.

This week’s host course is Pebble Beach and it is widely regarded as one of the most beautiful courses in the world. It hugs the rugged coastline on the south side of the Monterey Peninsula. It has hosted six US Opens and a PGA Championship. Each year, Pebble Beach Golf Club hosts the AT&T Pebble Beach Pro-Am in conjunction with Spyglass Hill and Monterey Peninsula Country Club.

The ‘Greatest Meeting of Land and Sea‘ was entrusted to a pair of amateur golfers with no design experience. The course was designed by Jack Neville and Douglas Grant and opened in February 1919.

The objective was to place as many of the holes as possible along the rocky and beautiful coast line. This was accomplished using a “figure 8” layout.

The course was extensively revised in 1928 by H. Chandler Egan. Other architects who have worked on the course include Alistair MacKenzie and Robert Hunter (1927) and Jack Nicklaus (creation of the new fifth hole, 1998).

Pebble Beach has being selected #1 America’s Greatest Public Course by Golf Digest for 13 consecutive years. Greens fees are among the highest in the world, at $525 per round in 2018.

Pebble Beach is a Par 72 that can extend to just over 7,000 yards from the championship tees. It is one of the shortest courses on the PGA Tour and with generous fairways it is not a tough test off the tee. The layout’s main defense is its small poa annua greens. At an average of 3,500 sq.ft., Pebble Beach features the smallest green complexes in professional golf.

Spyglass Hill was designed by Robert Trent Jones Sr. and opened in March 1966. Since 1967, it has been in the rotation of the multi-course AT&T Pebble Beach Pro-Am. It is a Par-72 layout that measures 6,960 yards from the championship tees. The first five holes all have views of the Pacific Ocean and the other thirteen wind through the Del Monte Forest.

The course record of 62 (–10) was set by Phil Mickelson in 2005 and equaled by Luke Donald the next year. Both were carded on the Thursday of the AT&T Pro Am under calm conditions.

Players drawn to play at Spyglass Hill on a windy day can often translate this into a scoring advantage. Going low at Spyglass can often be key to victory.

Last year, Daniel Berger captured the 2021 AT&T Pebble Beach Pro Am for his 4th PGA Tour victory. In the final round he was tied for the lead standing on the Par 5 18th. Needing birdie to win, the Florida native split the fairway from the tee and followed with a majestic 3-wood to the green. He drained a 30-foot eagle putt for a two-stroke victory over Maverick McNeally. He closed with a -7 (65) for a tournament total of -18 (270).

“To step up there and hit a great drive and then one of the best 3-woods I’ve ever hit in my life, and then to make that putt is just as good as it gets for me”

Ball-striking and in particular his approach play was key for the victory. He finished 7th in Strokes Gained Off-The-Tee (2.478 strokes) and 6th for Strokes Gained Approach-The-Green (4.610 strokes). This accounted for just over 60% of his overall strokes gained for the three rounds played at Pebble Beach. Other stats for the tournament include T49 for Driving Accuracy, 13th for Distance, T3 for GIR and 18th in Strokes Gained Putting.

The 2020 edition of the tournament saw Nick Taylor go wire-to-wire to win the AT&T Pebble Beach for only his second victory on Tour. The 31-year went toe-to-toe with Phil Mickelson on a blustery final round. He started Sunday with a one shot advantage and a -2 (70) was good enough to finish 4 strokes clear of Kevin Streelman with Big Phil a further shot back.

“That was amazing up and down day. I knew I could do it because I’ve done it before. But to do it today against Phil at Pebble, amazing.”

The Canadian’s putter was central to his success. He finished 2nd in Strokes Gained Putting for the two rounds played on Pebble Beach. This translated to nearly a six-stroke gain on the field average. He also finished T13 for both Strokes Gained Approach-The-Green and Strokes Gained Around-The-Green. Other stats for the week include T7 for Driving Accuracy, 39th for Driving Distance, T3 for GIR and 2nd for Putts per GIR.

In 2019, Phil Mickelson carded a final round -7 (65) to win the AT&T Pebble Beach Pro Am for the fifth time. The tournament needed a Monday finish as the final two holes couldn’t be played on the Sunday due to darkness. Lefty finished on a total -19 (268) to finish 3 strokes ahead of Paul Casey. It was Phil’s 44th victory on Tour taking his earnings past the $90M mark.

Phil’s iron play on approach is what laid the foundation for victory. He finished first in the Strokes Gained Approach-The-Green category gaining nearly 7 strokes on the field average for the two rounds at Pebble. Other stats for the week include T48 for Driving Accuracy, 25th in Driving Distance, T8 for GIR and 20th in Strokes Gained Putting.

In the 2018 edition of the tournament, Ted Potter Jr. carded a final round -3(69) to finish on -17 and win by three shots from four players which included Dustin Johnson and Phil Mickelson. Potter Jr.’s play tee-to-green laid the foundation for his victory. He gained almost 5 strokes on the field average in the SGT2G category for his two rounds at Pebble Beach Golf Links.

“This is a bucket-list place to win here, Augusta National, St. Andrews, there’s only a few in the world. It feels really special. It was amazing walking up the 18th green knowing that we were going to win. It’s just such a unique position. I tried to soak in.”

His iron play on approach and flat-stick were key to capturing his 9th PGA Tour victory. He gained almost 7 shots on the field average over the two rounds played at Pebble from his approach play and putting. He finished the week T14 in Driving Accuracy, T26 for Driving Distance, 3rd in GIR and 4th in Strokes Gained Putting.

Tom Hoge 16/1 (E/W) – the 33-year-old South Carolina native is back to defend his 2022 AT&T Pebble Beach Pro-Am title. Had an excellent start to the early season with a run of 4 x Top 13 finishes from 6 starts. His steady and impressive form rolled over into the New Year with a T3 in the Sentry Tournament of Champions. Cooled slightly in his last two outings but nothing to be alarmed about. Places top of the pile in this week’s Stats Analysis thanks to some impressive all-round stats. He is also 16th on Tour for GIR and 17th for Birdie Average. Fair to say the defending champion ticks a lot of boxes and some especially considering field strength. Excellent each way value.

Andrew Putnam 25/1 (E/W) – a regular at Pebble Beach, his best result in the recent past is a T6 in last year’s edition of the tournament. Enjoying a vey solid season, under-scored by a T2 finish in the ZOZO Championship and more recently a T4 in the Sony Open. Statistically solid, the 34-year-old places inside the Top 20 in this week’s Stats Analysis. The seasoned campaigner has heated up recently and his experience will stand him in good stead. Event Form tick, Current Form tick, Stats Analysis tick. What’s not to like?