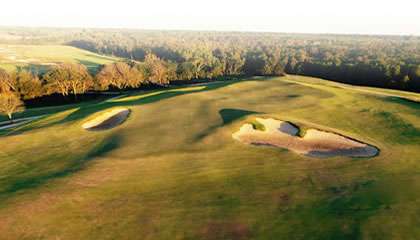 In 1968 the event was renamed the Byron Nelson Golf Classic and the tournament has been associated with the Nelson name since then.

From 1994 the tournament was played at the Four Seasons Resort in Irving, Texas. Last year the tournament moved to it’s new home, Trinity Forest Golf Club in Dallas.

“We’re all very excited about the [AT&T Byron Nelson] coming back to Dallas, The location will entice guys to come and stay downtown.”

Trinity Forest Golf Club was purposely built to attract prestigious golf championships back to Dallas. The club was founded in 2014 and the course opened for play in October 2016. The layout was designed by Bill Coore and Ben Crenshaw and is a Par 72 that can stretch to 7,450 yards from the championship tees. However, for the Byron Nelson, the course will play at 7,380 yards as a Par 71 with the Par 5 11th playing as a Par 4 for the pros.

Trinity Forest Golf Club is located less than 10 minutes from downtown Dallas and is built on a landfill. The course features natural rolling terrain with subtle elevation changes. It is a treeless layout bordered on all sides by towering hardwoods from the Great Trinity Forest.

The layout has a similar look and feel to a links-style course, integrating native wispy buffalo grass, waste areas, dramatic bunkering and pitched greens to give it a rugged, windswept look. The fairways are generous in size, but the ripples and humps make it difficult to find a flat lie.

Tour professional, Geoff Ogilvy had this to say on playing Trinity Forest;

“Trinity Forest is going to make us use our brains a little bit. You have to work out where your best angles are, one side of the fairway is easy, the other side is going to be difficult. Your mistakes are magnified, but your good stuff is magnified as well. Sometimes here at Trinity, the pin isn’t necessarily the target. It will be severe with the wrong shot, but very friendly with the right shot. You’ll have fun all day if you hit the right shot”

The course features a variety of challenges from short Par 4s such as the drivable 5th that measures just 315 yards to Par 5’s that range from 537 to 630 yards. The Par 3’s also offer a number of different looks, including the downhill 8th that’s highlighted by a severely sloping green with a ridge that separates the upper and lower portions of the surface and puts a premium on shot placement.

For those who do find the short grass with regularity, they will face difficult second shots to elevated greens that vary in size. Most of the greens are pitched and have shaved run-offs that funnel balls away from the hole.

There are no water hazards and the course’s biggest defense is the wind. There are 88 bunkers located in strategic positions and sometimes staggered to create angles into each green. When the wind blows accuracy becomes hugely important and hitting greens in regulation can become a challenge.

The fairways twist and turn at odd distances and angles, so long hitters could risk driving through fairways on several holes. Placement, rather than distance, will be key.

Last year, 21 year old rookie, Aaron Wise, carded a final round -6 (65) to finish three shots clear of Australian Marc Leishman and win his first PGA Tour title. A trio of golfers finished a shot further back which included JJ Spaun, Branden Grace and Keith Mitchell. The start of the final round was hampered by a 4 hour rain delay but Wise was unphased by this.

2/3 of his total strokes gained on the field average came tee-to-green and the other 1/3 came from the flat-stick. Wise finished the week 2nd in SG:Off-The-Tee and 1st in SG:Approach-The-Green gaining a combined 10.592 strokes on the field average for the week. Other key stats included 30th in Driving Distance, T6 in Driving Accuracy, 1st in GIR and 7th in Strokes Gained Putting.

Keith Mitchell 28/1 (Win) – shot a bogey-free final round 63 last year at Trinity Forrest on his way to a T3 finish. A victory in the Honda Classic is among 5 x Top 20 finishes this season and also includes a T8 in last week’s Wells Fargo Championship. Places just outside the Top 30 in this week’s Stats Analysis. Has a rock solid game tee-to-green making him a good fit for this week’s test. At last week’s Wells Fargo Championship he finished T23 in SG:Putting which helps to strengthen expectation. If his short game fires then he could be dangerous.

Charles Howell III 50/1 (E/W) – finished T9 in the inaugural playing of the tournament at Trinity Forrest shooting all four rounds in the 60’s. Already a winner this season in the RSM Classic, he also has 6 other Top 15 finishes. Tops the pile in this week’s Stats Analysis, he is also 26th on Tour this season for SG:Putting. His accurate iron-play will stand him in good stead with relatively unfamiliar greens serving as targets. Okay to dismiss recent uninspiring performances based on skill-set and last year’s performance. Terrific fit at good each way odds.