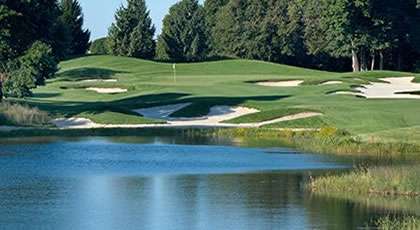 Last year marked the first staging of the 3M Open. The tournament will be hosted by TPC Twin Cities and is Minnesota’s first regular PGA Tour event for almost fifty years.

TPC Twin Cities is located in Minneapolis and opened for play in 2000. The layout was designed by Arnold Palmer with Minnesota native, Tom Lehman, acting as player consultant.

The course is a member of the Tournament Players Club (TPC) network which is operated by the PGA Tour. From 2001, TPC Twin Cities hosted the 3M Championship on the PGA Champions Tour. However last year it was announced that the Champions Tour event would be replaced by the 3M Open on the PGA Tour in a seven year deal.

The TPC Twin Cities setup for the Champions Tour event annually produced low scoring. Its wide fairways, low rough, accessible pin placements and manageable bunkers all contributed to the 3M Championship birdie-fest. In an effort to challenge the world’s best golfers, Tom Lehman was retained to oversee a remodeling of the course for last year’s inaugural 3M Open.

The upgraded TPC Twin Cities will play as a 7,468 yards Par 71 this week. The general layout for the course hasn’t change but hole number 3, which is normally a Par 5, will play as a Par 4 for this week’s tournament. Length was added on a number of holes through the construction of several new tee boxes. In all almost 500 yards in length was added to the course.

“I’d make it a tough driving course, the easiest way to do that is to firm it up, narrow it up and grow some rough”

As part of the the remodeling, fairways were narrowered and rough was higher which put more pressure on the driver. Course management will be important in order to put the ball in the right position to attack the pins. In addition some of the bunkering was expanded.

As last year was the first edition of the 3M Open, there is limited data to analyse and evaluate. That said, the ‘unfamiliarity-factor’ will test all aspects of a player’s game and players hitting full shots while being in tune with distance will prosper.

Last year, a 20 year old Matthew Wolff captured the inaugural 3M Open title in only his third start on Tour. He won in dramatic style making a lengthy eagle putt from the fringe on the final hole to edge out Collin Morikawa and Bryson DeChambeau by one stroke.

“I’m really not an emotional guy, but tears came to my eyes”

Again this week, expect players in the mix to have a healthy percentage of greens in regulation with first class putting.

Harris English 28/1 (E/W) – played in last year’s inaugural edition of the 3M Open missing the cut. However, his game is trending nicely with Top 20 finishes in each of his last two starts at the RBC Heritage and again at last week’s Memorial. Sits top of the pile in this week’s Stats Analysis, he is also 11th on Tour for both GIR and Scoring Average. With Event Form being all but irrelevant this week, Current Form and skill set are the go to indicators. Based on this argument he is hard to ignore. Excellent week for the Georgia native to make it win No.3 on Tour.

Henrik Norlander 50/1 (E/W) – with the noticeable absence of the majority of the top professionals, it is a perfect week for someone to step up and embrace the opportunity that this week’s 3M Open presents. Current Form arriving to TPC Twin Cities should provide the best clues as to who is likely to perform this week. Based on same the 6’4″ Swede looks a perfect fit to do well. He is arriving to Minnesota off the back of some strong performances including a T12 at the Rocket Mortgage Classic and a an eyebrow raising T6 in last week’s Memorial Tournament. Around Muirfield Viallge he was T15 in SG:Approach-The-Green and 2nd in SG:Putting. If he brings last week’s game to TPC Twin Cities then he should be one of the main protagonists. Good each way value.